Thanks to John Lewis, DVM, DAVDC, Past President of AVDS for submitting this weeks quiz of the month.

A 12-year-old neutered male French bulldog was presented for evaluation of a lingual mass on the left caudodorsal tongue. The mass was dark pink/red in color and measured 1.5 cm x 0.8 cm x 0.8 cm. The mass was found as an incidental finding by the pet’s primary care veterinarian. Mandibular lymph nodes were normal size and firmness bilaterally. On palpation, the mass was well circumscribed and its attachment to the tongue was as wide as the tumor. The adjacent tongue parenchyma felt normal on palpation. 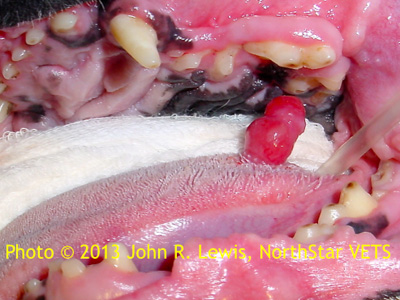 What are some differential diagnoses for the mass on the tongue of this dog?

How would you approach this case?

What is the difference between plasmacytoma and multiple myeloma?